Puerto Rico is an unincorporated territory of the United States in the Caribbean Sea. It is made up of a main island (Puerto Rico) and several small islands including Mona, Culebra, and Vieques. People that live in Puerto Rico are U.S. Citizens, but do not have a vote or representative in the U.S. Congress.

The population of Puerto Rico is just over 3 million with the islands spanning about 9,000 square kilometres. The official languages of Puerto Rico are both Spanish and English.

The largest cities in Puerto Rico include San Juan, Bayamon, and Carolina. 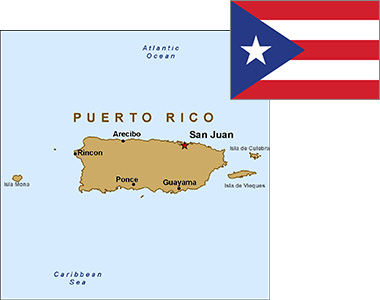